Let me tell you about how I spent my birthday on tour this year.

Following a double-show plus load-out in Toronto and a way-past-midnight border crossing blurred by intermittent ZZZs caught more on the highway than in a bed, Shen Yun World Company took on a breakneck load-in, double-double-show, and load-out weekend in my hometown of Boston.

Then 48 hours later, after throwing the last ounce of my energy into the performances, I sank into my bus seat thoroughly tuckered out, so hungry it hurt, yet filled with the most wonderful sense of satisfaction.

We had four full houses. The audience was great. I also got to see family and many old friends. But the greatest part of my satisfaction came from one realization. As I waved goodbye during the final curtain call Sunday night, it hit me that though life has taken me around the world (then back, around, and around again), there was something—a greater power, a grand plan transcending the ordinary—that has been guiding me along the way.

This is a blog about childhood memories, undertaking responsibilities for your faith, and answering a predestined calling.

My Boston
Though all we got to see of my hometown that demanding weekend was from bus windows, mainly in the dark of night, and through droopy eyes, my heart still fluttered at every street or building that brought me back.

The Wang Theater we were performing at was a stroll away from one of my most familiar haunts—Boston Common. As a kid, I spent many Sunday afternoons at the Common, the large public park downtown and America’s oldest. I loved making the rounds from the swings to the wading pool to the stables where the rangers’ horses fed (an attraction for the eyes but not the nose).

Every December, the park became a perfect holiday scene. The wading pool is frozen into a rink and hosts crowds of skaters gliding in endless rings. Trees, rooftops, cars, and everything in sight frosts over with a foot of snow and no less. Jingle bells are always ringing from you-don’t-even-know-where over the reliable tolling of the age-old clock tower. And the enticing scent of honey roasted nuts wafts through the air, so heartening it could sweeten a smile onto the face of Ebenezer Scrooge. A delightful place indeed.

Throughout elementary school, I took the rattling T there with my mom week after week, but for none of the reasons above. 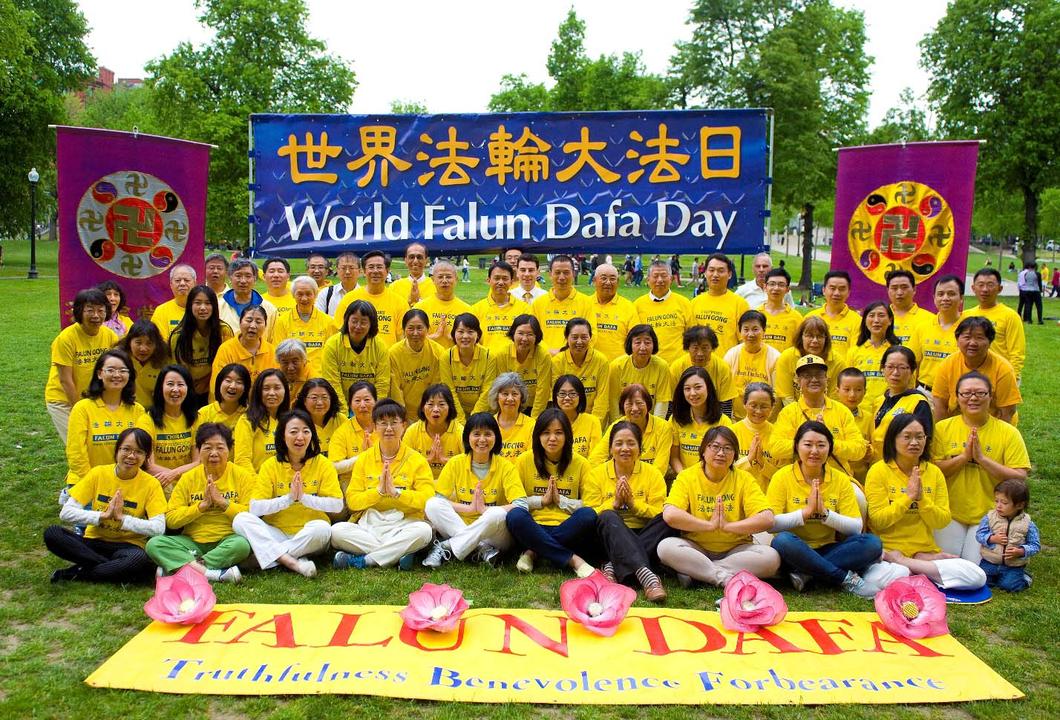 At the Park
Like tens of millions of people in over 70 countries, my family practices Falun Dafa: a meditation practice with ancient origins that improves the mind and body. When I was very young, practicing Dafa entailed going to the park to meditate (an activity in China as common as jogging or picnicking in the States), and always reminding myself to be a good kid by following its principles of truthfulness, compassion, and forbearance at home and in school.

Then one summer, things changed.

In July 1999, China’s communist regime began a brutal and uncalled for persecution against Falun Dafa. From the other side of the world, we received news of book burnings; propaganda being broadcast all over the party’s central television network; mock trials; illegal raids, arrests, and sentences; and deaths from torture in custody.

Falun Dafa practitioners in China responded to the injustice with pacifist means, only to be met with the most savage treatment. Accounts leaking out of China made us aghast. And in no time, a global grassroots movement sprouted. Those living in countries that respected human rights and the freedom of belief stepped out to raise awareness. From then on, instead of simply meditating at the park, we were also there to tell people about the terrible persecution, to expose the crimes.

When you live in the land of ice cream sundaes with cherries on top, it’s hard to imagine the harrowing oppression millions faced abroad. But that was the spine-chilling truth. So from a tender age, life suddenly seemed more urgent. From then on, there were constantly parades, peaceful rallies, and candlelight vigils to attend, petitions to circulate, and people to talk to. Boston Common, like numerous parks around the world, became a valuable platform to spread the word. And for conscientious Falun Dafa practitioners and their kids, they were so much more than sunlit afternoons and Frisbee-friendly fields.

So I grew up in two parallel, disparate worlds. In one, I learned about antecedents, algebra, and ancient Roman decrees. In the other, tagging alongside my mom, I was introduced to public speaking, human rights advocacy, and the United Nations. Half a century ago, an indignant world cried “never again!” Yet “again” was here. People in China with the same faith as those in dozens of other countries were losing their lives and homes. Outside of China, we all shouldered a responsibility to spread the word and to cease the injustice however we could. Beyond Boston, these ventures also took my mom and me to New York City, Houston, Washington D.C., Geneva, Reykjavík (Iceland), and more. They have great parks too.

From Park to Stage
In my 15th year, fate decided to direct me—the long-ago timorous toddler teetering in a tutu of baby pink—back to dance studios and the stage.

Shen Yun Performing Arts is a different platform: one with limelight, live orchestra, digital backdrop, and a wardrobe of princess-class costumes. So from then on, I encountered little more of pamphlets, parades, or public parks. If there were horses, we were riding them across the Mongolian plains. And if there were swings, it would be our bodies to the beat. As a member of Shen Yun, I got to train hard, travel far, and twirl with lots of heart.

Thinking back, transitioning from park to theater didn’t change anything in essence. On the Shen Yun stage, we use the arts to spread a similar message: authentic traditional culture and the truth of China from antiquity to today. So my new “Boston Common” became wherever we were performing, any of the hundreds of stages around the world, from the London Coliseum to Capitol Theatre, Sydney.

Stars Aligned
So this past season, what were the chances that out of Shen Yun’s five companies, my company got to perform in Boston, minutes from the Common, on my birthday, a Sunday afternoon? Plus, we were at the Wang Theater (no affiliation with Betty Wang, but still cool). And for the show’s closing piece, I played the part of a Falun Dafa practitioner meditating in the park. Stars must’ve been aligned above.

Perhaps people I encountered a decade ago were seated in the audience below. And perhaps those whom I missed finally came that providential weekend, led by the guiding hand of fate.